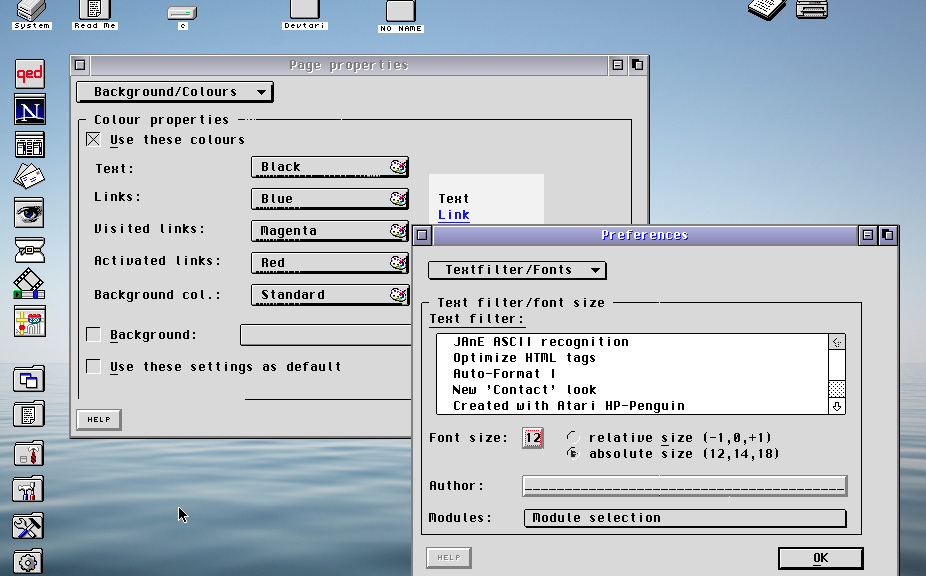 The HomePage Penguin was the first program to create a simple website with an Atari ST/TT/Falcon. First released in 1996, it follows the wizard concept, which guides the user step by step to his own page. Later versions were commercially distributed in Germany by falkemedia (2.x) and M.u.C.S. (3.x). In Great Britain CyberStrider and 16/32 Systems took over the distribution. The HomePage Penguin offers a modern user interface and supports various standards of the late 90s. Version 3.1 was never completed.


The program is now freeware. The manual can be downloaded. (PDF/RTF) 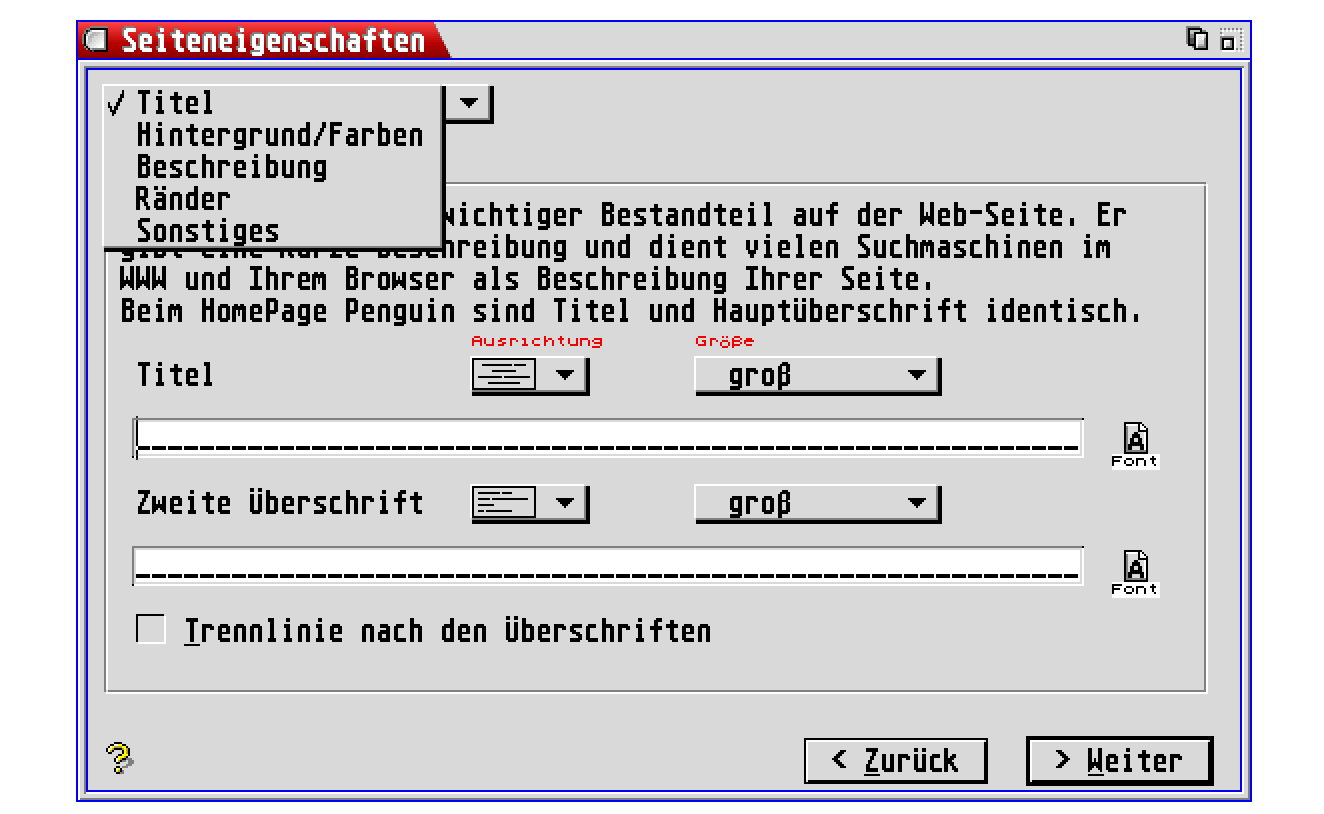 I first started making my own website in 1994 and while I used a text editor to do so, I also looked at early HTML editors. One of those editors had a wizard that would create a simple website in a number of steps. This should be possible on an ST too, I thought. So I fired up GFA-Basic and wrote the first version of the program, the HTML Penguin. Another program, HTML-Help, was created as a utility program for people working with HTML files. The former was never written for myself, while the latter was. My development machine was an Atari Falcon030, Atari's last computer.
The two programs weren't the first programs I wrote on the Atari though. I was one of the unfortunate ones who still received horrible ST-Basic with their new Atari in 1988, the time when Atari Germany switched to the vastly superior Omikron Basic. After writing a pointless game in ST-Basic, I bought Omikron Basic. Later I switched to GFA-Basic which enjoys more support in the Atari community. Most of the programs I wrote before were only intended to be used by myself. 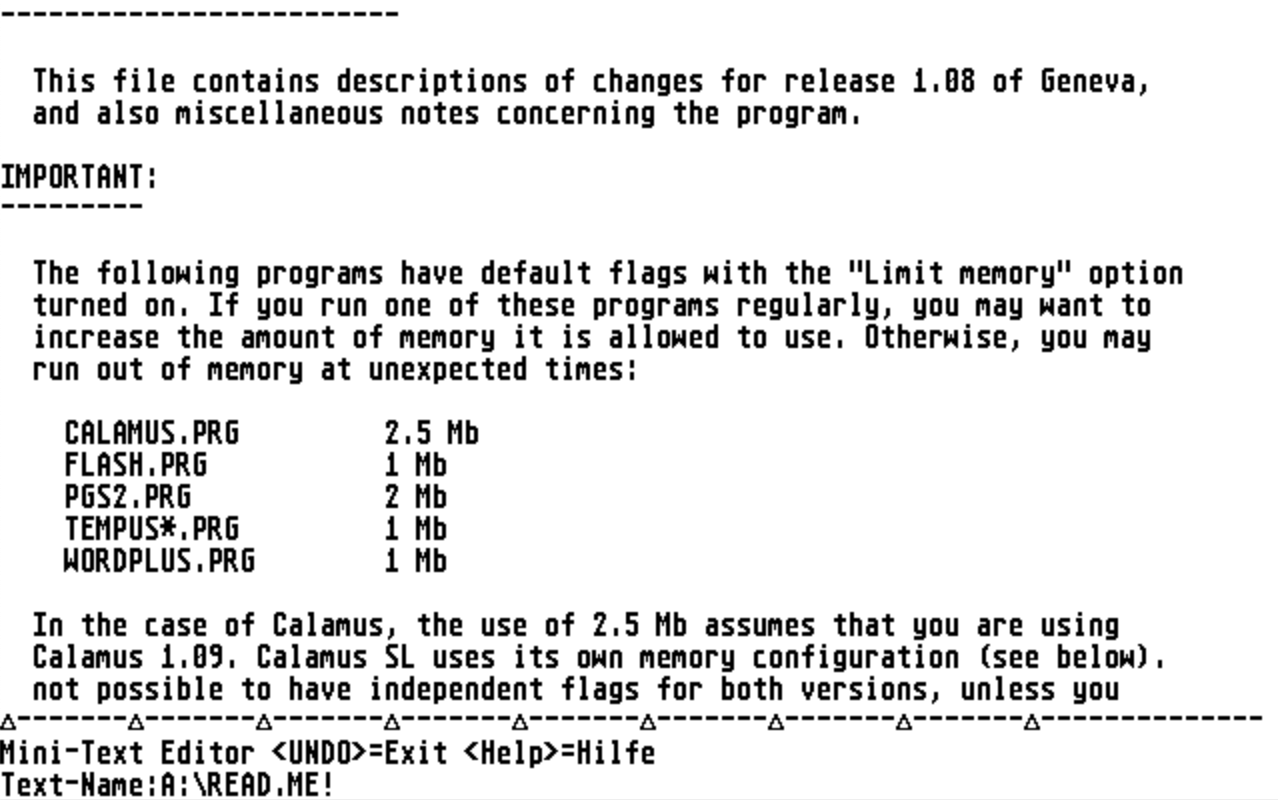 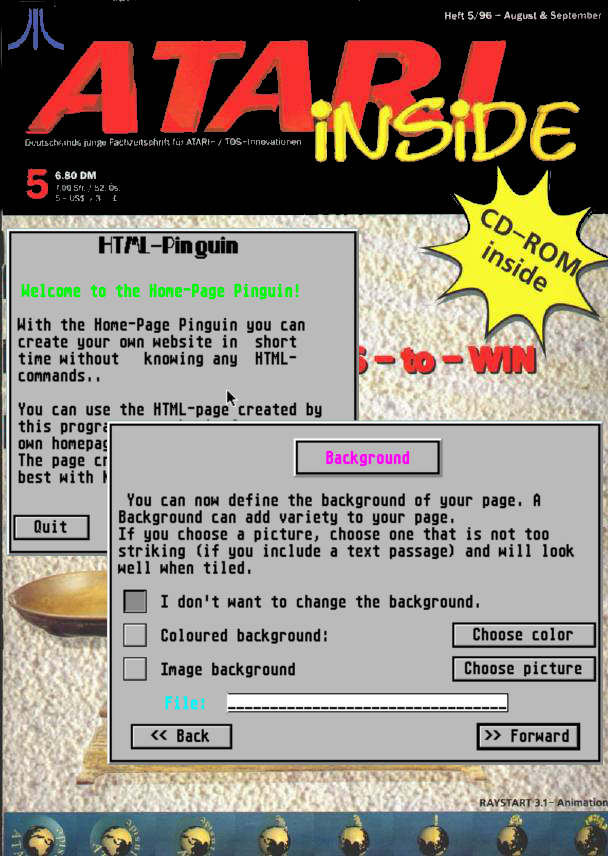 Both programs were released as freeware through magazine Atari Inside. Atari Inside offered a "special disk" for each issue which usually had no connection with any articles of said issue. This was at a time when it was uncommon for a magazine to have type-in listings. The magazine also released their own public domain disks. The special disks could contain programs that weren't freeware and exclusively licensed to Falke Verlag, publisher of Atari Inside. In other words, it was a cover disk that wasn't on the cover.
Issue 05/96 had the distinction in Atari Inside history, that it was the first (and last) issue to be sold to subscribers only. Revenue from print ads had dwindled at that point. But with the publisher of rival ST-Computer magazine trying to leave the Atari market, Falke Verlag took the opportunity to take over ST-Computer magazine, releasing a new publication as "ST-Computer/Atari Inside".

Unlike most German software, the Penguin and most of my other programs were released simultaneously in German and English language with the English version been done by myself. Most of the text strings were stored in the resource file, an essential part of an ST application with a UI. Users from other countries discovered the program and started to do translations - Swedish, French and other languages followed. These were all done for free by Atari fans and not all translations carried over to later versions. 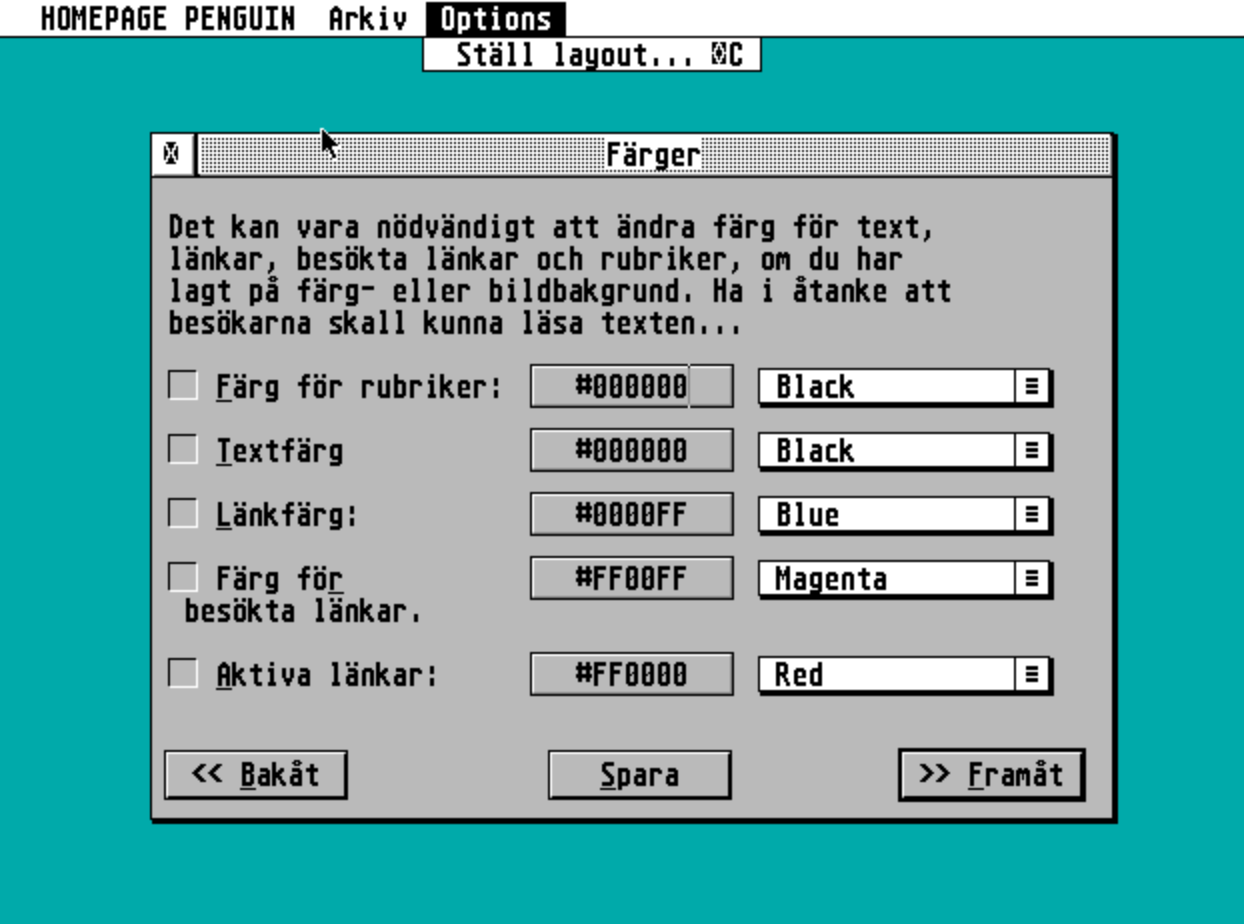 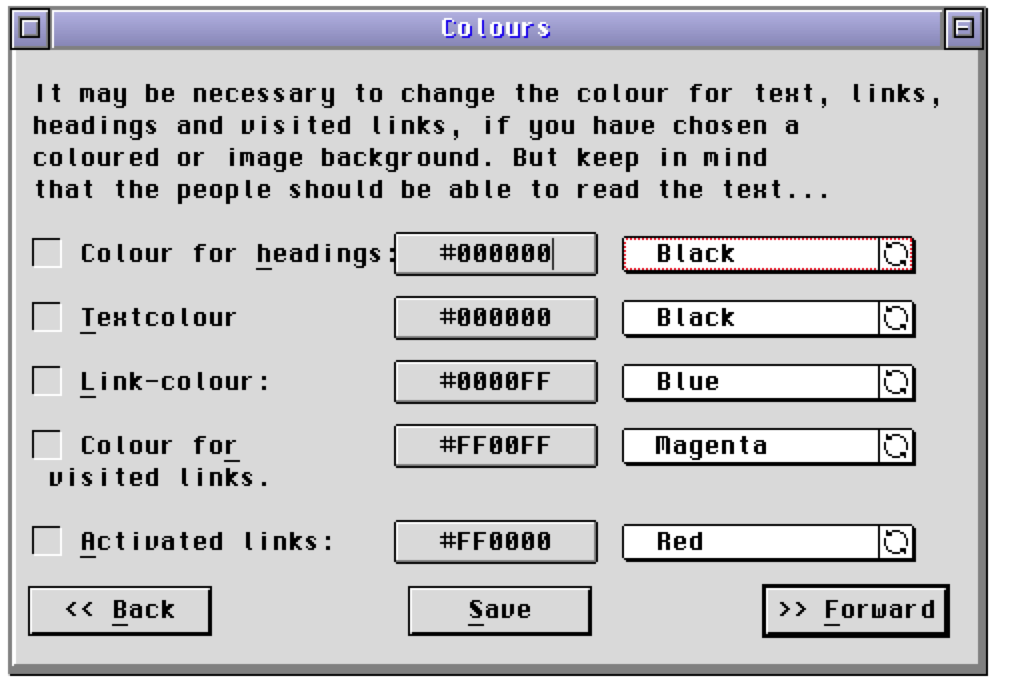 Version 1.65 was Shareware and the registered version was distributed by a shareware service outside Germany to simplify registrations. Ask almost any shareware developer on the Atari and they'll say that shareware is a waste of time - especially if you don't limit the unregistered version (aka "crippleware").

Version 2.0 was the first commercial version and called HomePage Pinguin Pro at the request of publisher Falke Verlag. The program was distributed in a simple paper sleeve with a printed manual. Among the new features was the "Navigator", a simple way to combine various elements. FaceValue was used as a GEM library now. 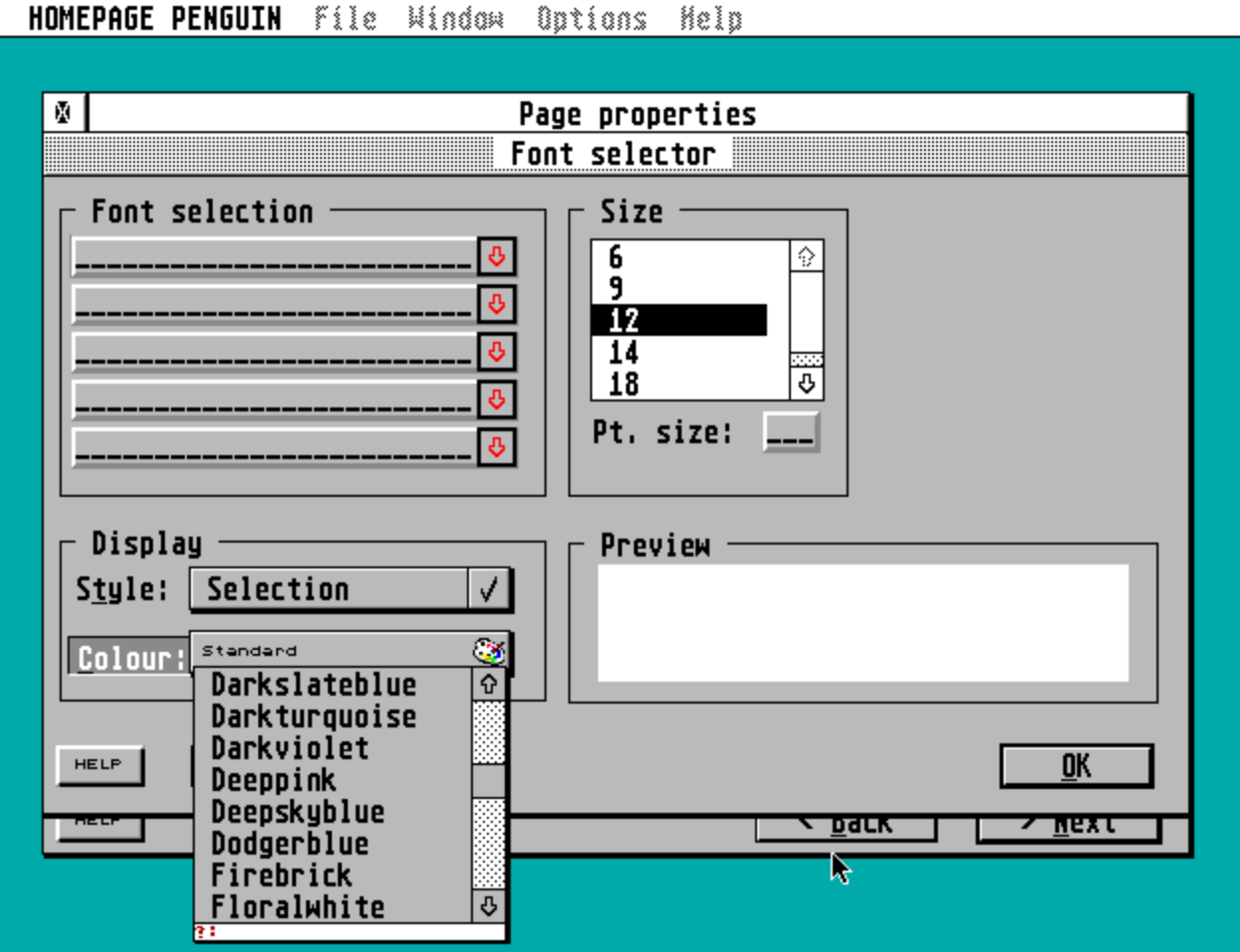 Distribution changed to M.u.C.S. for version 3 - they also distributed the Draconis Internet Package in Germany (Light of Adamas, Marathon). The printed manual - both English and German version - was again done by me. I even translated the Draconis manual to English. 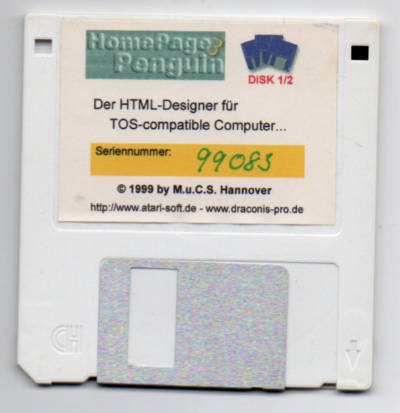 I was a beta tester for FaceValue and had plans to update HPP with the most recent release. Version 3.1/3.2 would feature a nicer user interface and the reintroduction of some lost features of version 2.x. Unfortunately, HPP was never a huge success - it sold decently for its time, but not enough to warrant investing more time into it. The same was true for many other contemporary apps for the Atari. At one point I also thought about moving the Penguin to the C language, but it would've provided marginal benefits for an application that was never a huge seller to begin with. HTML editing on an Atari was a niche in a niche and more experienced web developers would use a text editor anyway. 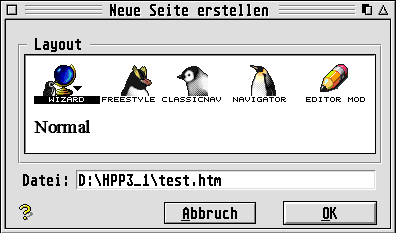 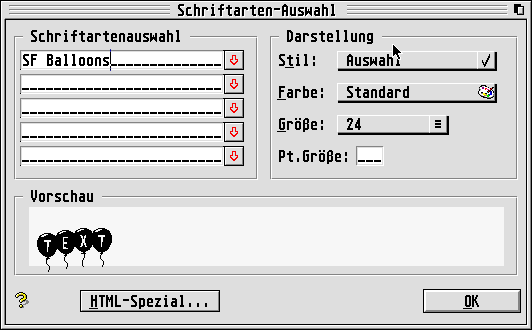