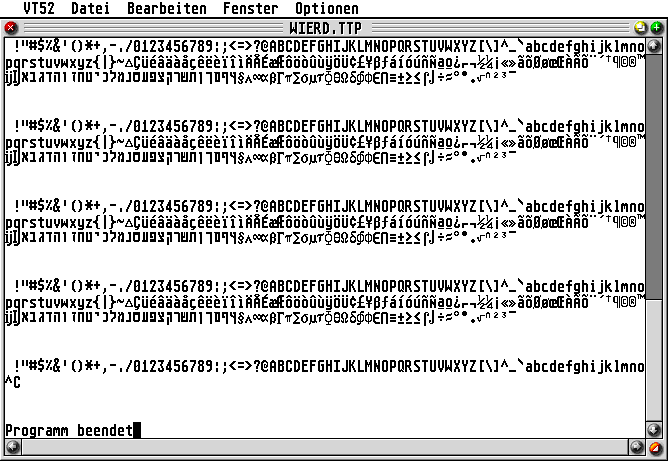 What are esoteric programming languages? Esoteric languages are not meant to be used seriously in everyday life. They are sometimes artistic, sometimes diabolic or they are a concept for a language off the mainstream.

Why the ports? When there was a bit of a news slowdown in the Atari market, I searched for source code on the internet and found many that could be ported without much effort. Over two weeks, a new language was released every day.

Blank, a fun, ugly, interpreted language that borders on being useful.

The environment is, roughly, that of a primitive trinary CPU. Both code and data share the same space (the machine's memory segment), and there are three registers. Machine words are ten trits (trinary digits) wide, giving a maximum possible value of 59048 (all numbers are unsigned). Memory space is exactly 59049 words long.

FBBI is an interpreter for the Befunge-98 language as defined by the Funge-98 Final Specification, written in 100% ANSI C.

Fromage was created as an experiment, and is based on the Turing machine model and a twisted set of control structures I had made earlier. It also resembles BrainF*** to some extent, though at the time I conceived the language I knew it very sketchily. Fromage's obnoxiousness and lack of ease of use, so typical in obfuscated languages, lie in its 10 instructions which operate on no data type larger than a bit.

Oroogu is a general-purpose imperative compiler language relying on the integer queue as its only data type. It was designed and first implemented in September 2000 by Georg Kraml and his then-girlfriend Angelika Riemer (joint acronym: K&R) out of terminal frustration with stacks in general and deterministic pushdown automata in particular.

Written by Asher Hoskins. A programming language that appeared out of nowhere. Rumor has it that it was used by the Swedish army. This is a Kvikkalkul to C compiler. Source code and sample programs are included.

MTFI is short for Magus Technica Funge Interpreter. It interprets Befunge-93, Befunge-96, and all Funge-97 variants. The program is written in ANSI-C, the source code is included. Befunge is one of the best known so-called "esoteric" languages.

This is the Atari ST port of the RUBE II programming language. RUBE II is considered an "esoteric language" with a language concept that differs vastly from ordinary programming languages. The complete RUBE II archive contains an interpreter written in C, a few sample programs and documentation.

Thue is a language based on the concept of the semi-Thue grammar/process, which is named for (and possibly created by) the Norwegian mathematician Axel Thue (pronounced "TOO-ay"). It is, in essence, an arbitrary grammar, which can (by its arbitrary nature) be used to define/recognize "Type 0" languages from Chomsky's hierarchy. Because the grammar can be used to define a language of such complexity, the process, itself, is essentially Turing Complete.

Whirl belongs to the group of esoteric programming languages. It's not designed to write serious programs with it, but you can earn much Kudos if you actually manage to create some programs with it.

Whirl was first published on July 9, 2004. The language was designed by Sean Heber who also wrote an interpreter. However, I used the C version of the interpreter written by Kang Seonghoon. The two example programs are also written by him.

Wierd is one of the strangest languages that have ever been constructed and consists of only two instructions: a whitespace and a non-whitespace. There are two sample files which work flawlessly with the Atari version and two other documents by the creator himself.